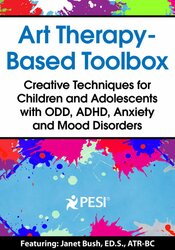 Do you work with challenging children and teens who seem resistant to every intervention you offer? Are they stuck, repeating the same patterns over and over and you feel like you’re powerless to help them?

Join Jan Bush, ED.S., ATR-BC, as she teaches you art therapy-based interventions that can complement and strengthen your professional toolbox. You will learn how to creatively engage your most resistant clients who have ODD, ADHD, anxiety and mood disorders.

Through demonstration and hands-on activities you will:

JANET (JAN) BUSH, ED.S., ATR-BC, is a credentialed mental health clinician and a registered board certified art Psychotherapist. She is credited for contributing to the fields of psychology and education as the first therapist in the nation to have laid the foundation for a mental health program in public education, in the field of clinical art therapy for Miami’s Dade County Public Schools.

Her breadth of clinical practice has not only included educational settings but also medical, psychiatric, outpatient, correctional and social service facilities, helping clients with a range of issues such as depression and anxiety, grief and loss, substance abuse, behavioral disorders, physical disabilities, relationship problems, career and educational concerns, LGBTQ issues and other life events.

She has been featured in local, state and national print and broadcast media including television shows, radio programs, newspaper and magazine articles, podcasts and NBC’s nationwide network news. Jan serves as a consultant in private practice based in Palm Beach County Florida.

Financial: Janet Bush is a consultant in private practice. She receives a speaking honorarium from PESI, Inc.

Non-financial: Janet Bush has no relevant non-financial relationship to disclose.

Click here to purchase the DVD or CD recording from our product store. CE hours and approvals on products may differ from live CE approvals.

To order the book, The Mindful Doodle Book, please visit our product store.

For live CE credit, you must watch the live webcast in its entirety at its scheduled time and complete the CE quiz and evaluation within one week. You will have access for 90 days after the program for review.

Please note: There will be a lunch and two 15-minute breaks; one in the morning and one in the afternoon. Lunch and break times will be announced by the speaker and at their discretion. A more detailed schedule is available upon request.

STRATEGIES FOR INTEGRATING ART INTO PRACTICE