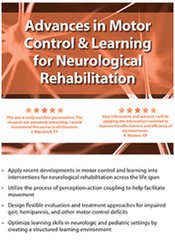 Advances in Motor Control and Learning for Neurological Rehab

In this course, you will examine current theoretical and applied perspectives in the field of motor control and learning and will discuss their implications for therapeutic evaluation and treatment. Course discussion will be focused at the behavioral level and will compare and contrast information processing and dynamic systems models in understanding normal and pathological human motor behavior. Implications for treatment stemming from both approaches will be examined.

You will constructively criticize current assumptions underlying motor control rehabilitation and discuss how theoretical frameworks bias evaluation and treatment options. Given an understanding of past and current approaches to motor control and learning, you will be able to flexibly design their own unique treatment approaches to optimize functional outcomes in each patient.

NOTE: Tuition includes one free CE Certificate (participant will be able to print the certificate of completion after completing and passing the on-line post-test evaluation).

The planning committee and staff who controlled the content of this activity have no relevant financial relationships to disclose. For speaker disclosures, please see speaker bios.

PESI, Inc. is an approved provider with the Florida Board of Occupational Therapy. Provider Number #50-399. This course qualifies for 6.4 self-study continuing education credits.

PESI, Inc. is recognized by the Physical Therapy Board of California as an approval agency to approve providers. This self-study lecture qualifies for 6.25 continuing competency hours.

PESI, Inc. is recognized by the New York State Education Department, State Board for Physical Therapy as an approved provider for physical therapy and physical therapy assistant continuing education. This self-study course qualifies for 7.7 contact hours.

This activity is provided by the Texas Board of Physical Therapy Examiners Accredited Provider #2106032TX and meets continuing competence requirements for physical therapist and physical therapist assistant licensure renewal in Texas. This activity will provide 6.25 CCUs. The assignment of Texas PT CCUs does not imply endorsement of specific course content, products, or clinical procedures by TPTA or TBPTE. Full attendance is required; no partial credits will be offered for partial attendance.

This self-study activity qualifies for 6.25 continuing education clock hours as required by many national, state and local licensing boards and professional organizations. Save your activity advertisement and certificate of completion, and contact your own board or organization for specific requirements.

BEN SIDAWAY, BSc, MA, PhD, MPT, is a professor of physical therapy at Husson College in Maine where he teaches motor control and learning, anatomy, neuroscience and research methods. He also operates his own home health rehabilitation practice and is the Director of the Kenduskeag Institute’s Human Performance Lab. Dr. Sidaway has practiced in neurologic, orthopedic, pediatric and geriatric settings. Prior to teaching at Husson College, Dr. Sidaway was a professor of motor control and learning at Louisiana State University where he received two Outstanding Teacher awards.

Dr. Sidaway is originally from England where he earned a BSc in kinesiology at Loughborough University of Technology. He undertook postgraduate work in physical habilitation at Liverpool University and later earned an MA in motor behavior and biomechanics from the University of North Carolina at Chapel Hill, a PhD from Penn State University in motor learning and control and an MPT from Husson College.

Dr. Sidaway has an extensive research background in motor control and learning with over 100 published papers and abstracts in national and international peer-reviewed journals. He regularly presents at scientific conferences and has made numerous invited presentations in the U.S. and Great Britain.

Dr. Sidaway has previously served as the associate editor of the international journal Human Movement Science and regularly reviews for other journals, including Physical Therapy, the official journal of the American Physical Therapy Association.

Financial: Ben Sidaway maintains a private practice. He is a professor at Husson University. Dr. Sidaway receives a speaking honorarium from PESI, Inc.

Non-financial: Ben Sidaway is a member of the American Physical Therapy Association; the North American Society for the Psychology of sport and Physical Activity (NASPSPA); and the American Alliance of Health, Physical Education, Recreation and Dance (AAHPERD).

TRANSFER OF LEARNING VS. SPECIFICITY OF PRACTICE