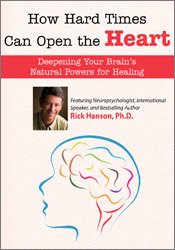 How Hard Times Can Open the Heart

With his best-selling books Buddha’s Brain, Hardwiring Happiness, and Just One Thing, psychologist Rick Hanson has become the foremost explicator of the brain’s “negativity bias,” our evolutionary tendency as vulnerable mammals to be more or less continually on the lookout for danger, ready to fight or flee, and more likely to remember bad experiences than good. Integrating his background in neuroscience, contemplative practices and positive psychology, he has also become one of our foremost clinical innovators, focused on how to help clients have greater access to their inner resources and enhance their capacity for deep pleasure and savoring the moment.

In this recording, Hanson will focus on how our deepening understanding of neuroscience can enable us, even in times of great stress, to tap into five natural capacities of the brain that, rather than constricting us into fight, flight or freeze, can open possibilities for living fuller, more aware lives.

Dr. Hanson has been a trustee of Saybrook University, served on the board of Spirit Rock Meditation Center, and was President of the Board of FamilyWorks, a community agency. He began meditating in 1974, trained in several traditions, and leads a weekly meditation gathering in San Rafael, California. His work has been featured on the BBC, CBS, and NPR, and he offers the free Just One Thing newsletter with over 114,000 subscribers, plus the online Foundations of Well-Being program in positive neuroplasticity.

He enjoys rock-climbing and taking a break from emails. He and his wife have two adult children.